Recently, we’ve been dealing with some interesting font license problems we have not seen much before. We wrote earlier how free web fonts can become a problem when used in localization. Most print design that we see used are licensed fonts that are either available traditionally by buying the font license, or available through cloud services like Adobe’s Typekit. When a font is purchased or used as a service, the font’s (or service’s) EULA license will tell you what limitations are being put on the use (and distribution) of the font.

The world of typography is rich in history and full of intrigue. Fonts are so ubiquitous to everyday life that font forensics are a legitimate way to uncover fraudulent activities. While most simply enjoy the world of typefaces in books, magazines, billboards or online, some devote their entire life’s work to crafting typefaces (the design of letters). Modern typography still takes a lot from the fonts used in heydays of the newspaper industry (e.g. Times) and billboards (e.g. Gotham) and magazine publications are still being used today or re-imagined into new designs that are used on packaging, websites, video, etc. Popular social media platforms like Pinterest have provided a whole new set of inspirations for designers to the use of different typefaces (the design of the letters). And designers are able to access a wealth of font resources, both paid and unpaid, to create their designs.

Consider the font’s EULA before using a font 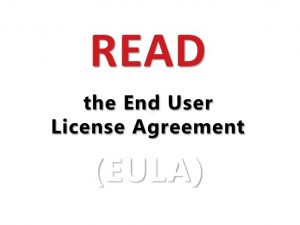 In the US, there is no copyright law on the typeface. The design of a font is not protected by U.S. copyright law and it is is technically not illegal to copy a font’s design for commercial use (not that this is practical and this is not typically the case outside of the U.S.). However, to use a font license in any commercial project, one should study correct legal rights and responsibilities that comes with each piece of commercial font software (the actual program on your computer controlling how a letter or character is supposed to be shown).

Best practices from various articles suggest that Designers and Agencies should have a font policy in their organization to keep track of their font licenses and its use. A part of this policy, besides the legal rights specific to the way you use the font in any commercial project, is also that you need to look at the font’s EULA to see if the font can be shared among vendors. This has recently become an issue in several projects where fonts that our typesetters don’t own were used for a job. The font’s EULA did not permit our client to share the font with us, resulting in the need to purchase the font. Another development in the font world is the increased popularity of cloud based services like Typekit. These fonts do not package with your design so even a printer will have to subscribe to Typeset and obtain fonts to get a design file to print. Typically, printers will work from hi-res PDFs (or they should) or an outlined file (although outlined designs are not always reliable) to avoid font issues and other trouble. However, in typesetting we do need access to the fonts.

Typesetting is the art of organizing letters in such a way that text becomes legible, readable and appealing when displayed. When we typeset a translation into a design for our client, we often rely on fonts that come from our client. However, when a vendor is required to purchase a font to typeset a job that was designed by a client, the issue of costs becomes a problem. The typesetter could acquire the fonts themselves and bring the cost somehow into an hourly fee for everyone. Having a large library of fonts available for use may be an advantage for some typesetters who want to be versatile, but for the most part the job of a typesetter is to work with the design of someone else. Typically, if there is a font that is used specific for that design, that font is acquired specifically for that job. These costs are part of the job. The font typically is useless after the job unless the font becomes part of a major brand campaign.

The conundrum lies in the issue of “having too many font options” and the costs associated with acquiring every font to work with every design that comes in. In some sense Typekit is helping a little because the subscription model takes away some of the worry of licensing. And since Adobe has forced pretty much every designer and typesetter into the cloud based service model, a lot of fonts can now be licensed using the services rather than a perpetual (traditional) desktop license. However, the cost of using fonts that are not typical or available through cloud services may increase the cost of the job. Somehow the cost of that font needs to be recouped.

Tips for a Font License Policy for Multilingual Typesetting

If your agency anticipates the need for multilingual typesetting, it may be a good idea to add some provisions when choosing a font:

Read more on our agency page how we try to help organizations with their global brand management.  Or contact us for more information.