St. Louis’ Business Journal’s cover story of the February 20 – 26 edition reads “Will Cuba Light Up St. Louis?” While it being an obvious reference to Cuban cigars, the burning question is what kind of effect the recent Regulatory Amendments to the Cuban Trade Sanctions will have on the economic opportunities of St. Louis companies.

St. Louis has Fortune 500 companies and headquarters operating in some of the major industries that are believed to benefit from these regulatory amendments. Industries like the Travel Industry, Financial Services (Banking, Credit Cards), Construction and Agriculture are big in St. Louis and already some of the major organizations in St. Louis are looking into the possibilities of doing business in Cuba.

There has already been quite a demand for information about Cuba from local businesses according to the World Trade Center of St. Louis, where our offices are located . With Cuba emerging as a new market for many companies, there is a need to get educated on the way marketing and branding works in Cuba, and where it will likely evolve.  If you are a business that wants to market in Cuba, give us a call to see how we can help you with Spanish translation for Cuba.

Cuba and Puerto Rico were the longest lasting Spanish colonies in “the new world.” They were free from Spain in 1898, after U.S. intervention and the end of the Spanish-American war.

Before Spanish colonization, they were both populated by the Taínos (descendants of the Arawacs).  The little influence they left in language before dying from the common cold, chicken pox, dysentery, cholera, and sometimes brutality brought by the Spanish conquerors, was mostly in names of places and items.

These words were common in all the Greater Antilles where the Taínos lived: “huracán,” “hamaca,” “yuca,” “juey” and “guano.” Many of these words were not only accepted by Spanish, but also by English with slightly different spelling.

Both islands were invaded and colonized by Spaniards from the same areas.  Many of the initial conquerors that came from the late 1400s through the 1600s came from southern Spain, from the area of Andalucía.

Their Spanish had a strong Arab influence, because they were under Arab/Muslim rule for almost 7 centuries.  The most obvious difference from the Spanish from Castile and Madrid and the Spanish from Andalucía, is in pronunciation, especially the “s” and the “c.”  This distinction is called “seseo” which means “lisp.”

Like the southern United States, both islands had huge populations of slaves brought in to work in agriculture.  Their cultural influence is appreciated in the arts, especially music, but also in language.  There are many African words used in the islands: “mofongo,” “mondongo,” “conga” and “bongo” are examples.

Many people from the Canary Islands came later in the 1800s and 1900s. (Spain felt the descendants from the initial migration of conquerors and people appointed by the crown to rule no longer felt Spaniard enough, and since many of the other Spanish colonies had fought and gotten their independence, they thought sending new Spanish families to Cuba and Puerto Rico could help preserve their holdings in the Caribbean.)

Because most Canarians were simple island people, the families from the Canary Islands and the people from the Caribbean islands soon blended creating a strong bond. The Cubans and Puerto Ricans added to their language many of the traits of the newcomers, especially their pronunciation.  For example, not pronouncing or pronouncing very softly the last letter of a word when it’s a consonant (“caridad” becomes “caridá”), and substituting one consonants for another, (“perdón” becomes “peldón” by substituting the “r” for “l”). 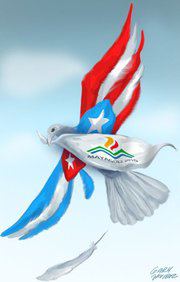 It is said that “Cuba and Puerto Rico are the two wings of one bird” (Cuba y Puerto Rico son de un pájaro las dos alas) to the point that their flags have the same pattern, only the colors are interchanged.

1898 was the year the islands began to develop differently.  Puerto Rico became a US territory and Cuba became a republic. Cuba, like the rest of the Latin American Republics began to establish it’s national identity and to struggle with establishing self government and develop an economy.

Eventually it leaned into socialism and was subjected to the embargo that was just lifted by the U.S. Like other socialist countries, people may address each other as “compañero” or “camarada” (comrade) instead of “señor” but still treat each other informally.

As a personal note, when I speak with the original Cubans that migrated to the U.S decades ago, or those that migrated recently (not 2nd or 3rd generation Cuban Americans), I feel like I am talking to my grandmother’s generation (I hear an old-fashioned Spanish, very warm and somewhat informal).  The main difference is that they have a stronger pronunciation of consonants and they prefer to use the diminutives “ico” and “ica” (poquitico, chiquitica), while we prefer to use “ito” and “ita” (poquitito, chiquitita).

When we speak, we share the habit of being endearing (like Americans from the South who call people “darling” and “sweetie” and “sugar” and are not meaning to disrespect). We use phrases like “mi amor,” “cariño” or “mi vida” and it is rarely considered disrespectful.  In writing, we tend to be formal, unless we are addressing young people.