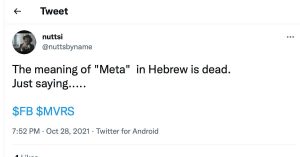 The importance of brand name evaluation for international markets may not be evident until it’s too late. Take Facebook’s decision to change its name to Meta. Hebrew speakers were quick to poke fun at the fact that “meta” is the feminine form of the adjective “dead,” while in Portuguese, “meta” is the imperative form of a verb used as slang for having sex.

Alex Schultz, CMO and VP of Analytics at Meta, has referred to the new name as representing something “beyond,” which is one of meta’s possible meanings in Greek. And while in English calling something “meta” usually invokes the idea of being edgy or thought-provoking, it’s clear that in many other languages it has associations ranging from unfortunate to offensive.

Brand name evaluation for international markets, also known as linguistic screening, that included Israel, Greece, Portugal, and Brazil would have flagged negative associations with the name Meta. So, as an LSP (that’s language service provider), we interpret this gaffe in a few different ways: 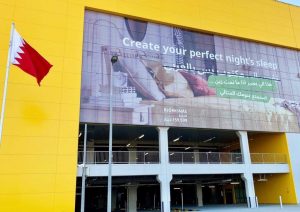 Of course there’s also the possibility that Facebook did include those countries in their linguistic screening process but went forward with Meta anyway. Maybe they even had the attitude that there’s no such thing as bad publicity. Given that the social media giant has been under fire for some pretty serious allegations, perhaps they thought a bit of a joke at the expense of their new name in some languages would increase attention to the name change without doing significant damage to their corporate reputation. Plus, brands may even stand to benefit if they handle a translation error in the right way.

What we can take from this, however, is that linguistic screening can save you and your carefully crafted corporate identity from unwanted negative attention due to language-related associations. The Harvard Business Review makes the excellent point that even if you are not releasing your product or service internationally now, if you think you’d like to expand outside of the US eventually, it makes sense to do brand name evaluation for international markets now, rather than risk repercussions later. We’ve referenced the adage that “an ounce of prevention is worth a pound of cure” before, in relation to pain points in translation. But it is applicable to pain points in global launch as well: why risk a rebrand later, which could incur significant costs and brand damage, when you can be sure that your product or service is ready to go global when you are?