If you are a publisher and your clients want their comic books to reach new markets and they have their own translations to use, you may be looking for comic book typesetting to help take those translations into the design files.  What does a publisher need to know and what information would help you to keep it cost effective. 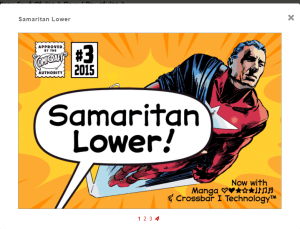 How do you know if the fonts you want to use will support the languages you need?  Comicbookfonts.com is a great place to start.  They do state the languages that are supported but I find it very vague as they do not know specify each language but rather the region.  If you click on the actual image of the font on the page, you get a little more detail and characters are shown on one of the images. For a recent comic book typesetting project, we were researching fonts for German for a client to come close to the font they were using in English.  Samaritan Lower, as pictured on the left, supports Western and Central Europe.

If we click through the font image, we can get an image of the characters supported. We want to keep in mind that German has four special letters; three are vowels accented with an umlaut (⟨ä, ö, ü⟩) and one is a ligature of ⟨s⟩ and ⟨z⟩ (⟨ß⟩; called Eszett “ess-zed/zee” or scharfes S “sharp s”), all of which are officially considered distinct letters of the alphabet.  You can see the Eszett in the image below of Samaritan Lower. 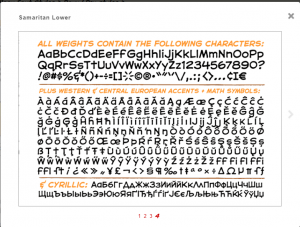 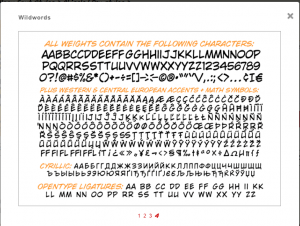 We initially thought that Wildwords would also be a good candidate font but alas, the ß was missing. You must be diligent in your font research and be sure to check all characters for each language.  You can go down a rabbit hole of research, forums, blogs or you can rely on your language service provider working in comic book typesetting to help you and provide you with the research and the options.  We are very quick at research and know what we’re looking for so it’s not an expensive investment but one that will save you costs. You don’t want to begin typesetting and then find out that a character is not supported and then you start over from square 1.

Can you find the Eszett character ⟨ß⟩ in this image with the font we selected? 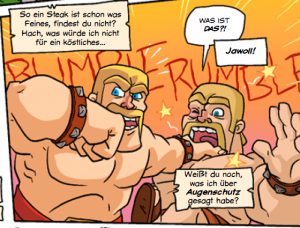 To have a Chinese typography font, font foundries not only have to create a character set of at least around 20,000 characters, they have to do it twice: once for Simplified and once for Traditional. And that doesn’t even take multiple font weights (thicknesses) into account. Because these font files contain so many glyphs, they also are very large fonts – about 3-7 MB per font weight. Comicraft has had a kickstarter out since 2016 to create these Asian language fonts but these will take years to create. The Japanese and Chinese writing systems use many of the same characters, so a single font works for both languages.  To date, they have about 2500 characters so we’re still waiting!

Japanese Manga does not use “cartoony” fonts so you have a little more choice. For a block of text(speech) Hiragino Maru Gothic Pro is a great choice. For shorter text for emphasis(onomatopoeia e.g.) we could recommend Hiragino Kaku Gothic Std font, part of OS X, however, be sure to pair it up with the English with similar styles – Serif with serif and sans serif with Sans Serif. For example, if you’re using serif for English text, then Kozuka Mincho Pro is good. For sans-serif, Kozuka Gothic Pro. 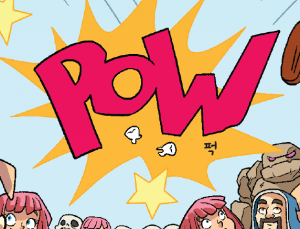 SFX stands for “sound effects.”  These are onomatopoeia in manga or comics such as boing, gargle, clap, POW!, etc.  It is used to add action and excitement.  For foreign language comic books, you always leave the English SFX and put the translation under it in a smaller font.  That initial sound of the SFX in its original language is important to the experience of the comic reader. To the left is an image of how it is treated in Korean.

Have a comic book typesetting project?  Want to use your own translators or use ours?  Let’s discuss to find out what works for you.