Identification of foreign languages in translation

When you work with languages all the time, it gets easier to identify languages instantly and notice mistakes without even knowing the meaning.

For instance, you don’t need to know anything about the Chinese written language to quickly see whether or not your content is written in Traditional Chinese or Simplified Chinese. Just look at the punctuation. 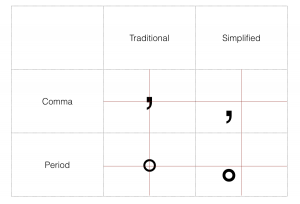 Simplified Chinese has all the punctuation set at the baseline whereas the Traditional Chinese should have the periods and commas hanging in the center. That’s very useful to know as a designer when you work with Chinese language layout since it is one marker for knowing whether or not your fonts are supporting the language (empty boxes might give you another clue).

IDENTIFICATION OF FOREIGN LANGUAGES AND WHAT IT’S WORTH

Being able to identify languages and also notice its particular characteristics can be helpful to identify systematic issues in your content. For one thing, knowing simple artifacts in languages could help you working with foreign languages better. For instance, when selecting fonts for a subtitle project, it’s easy to identify punctuation issues in Traditional Chinese layout based on the position of the period or comma. You don’t even need to go through official linguistic review to identify this issue and it could save you on production costs and rework. Yet, we come across outputs where the production team didn’t seem to notice the issue and then it is already further down the workflow when ideally it could be before the issue was caught.

The reason why sometimes knowing these artifacts can be beneficial is because not everyone has access to the same software to test out how the font works on that system, so some of these issues don’t appear until a piece has been produced. Anyone working with production of foreign language materials ought to take notice of these artifacts to make a better product.

In a recent healthcare communication translation project, we were reviewing the Chinese translation online of the product website.  Although a correct font was being used for the Chinese, the punctuation was still displaying incorrectly.  We had to go into the CSS file and look at the styles as those will also drive what you see on the website.  The website was being staged on the client’s server but if you right click on a page, you can go to Inspect Elements and there delve into the code of a localized website. Identification on font issues in a website translation project are discussed further here as well.

WHICH CHARACTERISTICS AID IN IDENTIFICATION OF FOREIGN LANGUAGES 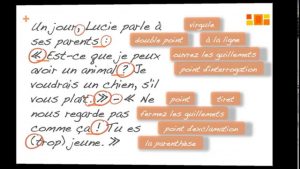 How do you identify Japanese from Chinese or Korean? You can identify one or two characters to the languages that are unique. Japanese often uses this characterの (think of it as the upside down e!) while Korean is mostly made up of characters that have an oval shape. 한국어 – notice two oval shaped characters in the word Korean; they are undeniably present in any written Korean document. While the applicability of it merely is to identify what kind of language you work with, it’s may be good to familiarize with those languages if you deal with lots of them and need to sort them out. Here are additional ways to identify CJK (Chinese, Japanese and Korean).

A designer’s eye for foreign languages

If you are dealing with multiple languages, it’s worth to take note what makes each language unique. Because you are able to then spot and prevent issues that might not get caught down the road. For instance, it’s helpful to recognize that Chinese uses double-byte spacing and therefore is not always perfectly aligned when you deal with punctuation marks at the beginning of, say, a bulleted list. Those that start with punctuation marks like a parenthesis will have some white space, often much to the designer’s dismay. Chinese also intently uses two kinds of characters for the comma. One to separate items in a list and the other format for any other proper use of the comma (conjunctions for instance). Those differences might seem like an inconsitency or font issue, but they are not.

You may also need to adjust line height in the languages that is different from the line height in English.  This is so that your characters don’t sit on top of each other as they do in the image to the left.

Spanish and French do not use Title Case in headings or titles like we often use in English. It doesn’t look good in those languages but many designers will change the capitalization if they think it looks better or more consistent with the English. German is definitely not a language where you want to change capitalization as every proper noun is capitalized. It might be good to know that before changing everything to Sentence case.

It’s also helpful to recognize that Arabic and Hebrew are right-to-left oriented languages (actually bi-directional if it is interspersed with Western language) and require all design elements to be oriented in that way, including the way you orient your binding to open from left to right, rather than the other way around. It seems trivial knowledge but it’s our experience that any document that we get that has certain RTL languages included (say, those Section 1557 lines that are mandated by law) are almost always formatted left-to-right.

These are just some examples but it’s possible to learn some of these rules by heart; especially if you work with these a lot and you pay attention to the edits being made as you learn.

Understanding particular characteristics of the written language can prevent a lot of headache in review by avoiding marking up these as mistakes or trying to correct these manually. It’s not necessarily productive to learn about all these different characteristics, but knowing at least that something that looks systematically “off” might be an artifact of the languages as opposed to a mistake may be something to keep in mind for the future. Also, foreign languages don’t necessarily need to be intimidating to think there is nothing valuable you can derive from them.