Why are Burmese Fonts so Problematic?

Burmese fonts can be confusing – not only is the script complex, but not all fonts are compatible with each other. Why is that? In this blog, we will discuss the history of the digital Burmese script and why its complicated path from paper to screen has resulted in two opposing approaches that have implications for desktop publishing, ethnic minority rights, and social media.

History of the Burmese Script

Not often does typography become a point of contention. Usually a form of written language is developed, evolves through public and elite usage, and then adapts to the printing technology of the time. The Burmese script is no different in that regard: it was adopted sometime around the start of the eleventh century (ca. 1000), and evolved from a south Indian script – either Kadamba or Pallava – introduced by Hindu traders and Buddhist missionaries to Southeast Asia throughout the first millennium. That script developed into the Pyu and Old Mon scripts which later were adapted to the modern Burmese script. The Burmese script is now used to write more than eight living languages (e.g. Burmese, Shan, Mon, and Karen) and two liturgical languages (i.e. Sanskrit and Pali).

Like all Indic scripts, Burmese employs a multi-layered system of consonants and vowels, wherein letters can appear before, above, underneath, or after each other. Most often, in these systems – known as abugidas – the vowels are typically indicated as diacritics – or small marks – attached to consonants. For example:

From Palm Leaves to Tablet Screens

As you can see even from these simple examples, the script is extremely complex, with letters being able to take a variety of forms depending on how they are combined with each other. In order to accomplish this feat using the fairly limited Latin-based keyboard requires some creativity. There are two main ways this can be accomplished: the first is by encoding every letter shape to an individual key, the second is by using intelligent rendering – a character is encoded to one letter, but its shape is modified automatically based on what other characters are combined with it. The first approach – every shape gets a key – was used by non-Unicode fonts, such as the now-dominant Zawgyi. The latter, more efficient approach is the Unicode model and is the reason it has become the international standard for fonts worldwide.

So why is the less efficient Zawgyi font the dominant mode in which Burmese script is used online? Well, due to the country’s isolation, Myanmar actually had fairly limited digital access until recently. That meant that font development for the script was fairly slow. Some of the northern ethnic minority languages actually used Thai or Lao script online before the Burmese script was available. However, in the 2000s things began to move forward and in 2006 Zawgyi was released as freeware. It has withstood some criticism of piracy of an earlier font, Myazedi, but through a variety of tried and true practices (embedding in IE, setting itself as the default font for the entire OS upon installation, etc.) it became the most common font pre-Unicode. (More on the controversial rise of Zawgyi as the king of Burmese fonts here.)

The rise of internet news sources and Myanmar bloggers around the same time – and the ease with which people could obtain and install Zawgyi – also helped it grow. Soon it became ubiquitous and even today it is the font used for the Burmese script on Facebook. The fact that the Burmese script is used to write multiple languages is actually quite salient, though, because Zawgyi uses up all of the keys for just the Burmese language mode of writing. It does not allow for different uses of the script for the many other languages spoken in Myanmar. (Think of trying to type in French or Spanish – but your keyboard cannot be mapped to include the ñ, œ, or accent marks.)  This makes Zawgyi a contentious font choice as it can be seen to further the marginalization of Myanmar’s many non-Burman ethnic groups.

From another perspective, because Zawgyi uses a different key for every character shape, there are multiple ways a word can be typed and it can still appear correct. It would be like being able to type “this” as: [t h i s] or [h t i s] or [h t s i] etc. and it would always appear on screen as “this.” (This works because the letters in Burmese stack, remember, so you don’t see a chronological order of characters appear, as you do with strictly linear alphabets like English.) That makes spell-checking, searching, and many others things very difficult to do in Zawgyi. To the computer, (who sees 1s and 0s, remember – not the character we read) the different orders of typing one word look like different words! This is what lies behind the fact that Zawgyi is not compatible with Unicode fonts. The Unicode fonts think Zawgyi is giving them six different letters when, in fact, they are all the same letter in different shapes. Confusing!

So, what is the way forward? Well, most of the major tech companies have endorsed Unicode as the future of Burmese script encoding. Apparently, Khmer also had a similar issue and their government took a pro-Unicode stand which effectively ended the problem. (Rumors exist that the Myanmar government could do likewise?) However, the amount of users stuck with Zawgyi – from habit and difficulty of converting older documents between the two – has made this into a sticky situation. Nevertheless, when in doubt, remember to always choose Unicode Burmese fonts like Padauk, Parabaik, and Myanmar3! It’s better for the present and future of your translations.  These are also the fonts to use online on your website. 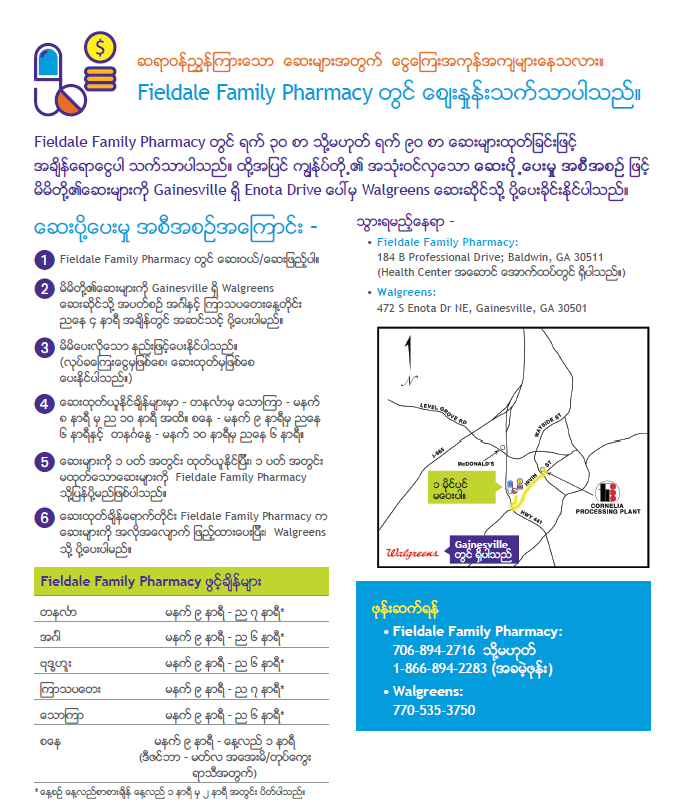 Typesetting with Burmese fonts can be tricky. When using Adobe design products you must use Zawgyi as Burmese Unicode is not yet supported.

But what to do when you have design assets translated into Burmese? Unfortunately, Adobe InDesign and related products do not support Unicode fonts for the Burmese script. This means that we do, actually, have to use Zawgyi for the time being. At Language Solutions, we have developed many project assets for InDesign CS 6 that we have typeset successfully in Zawgyi using World Composer and even developed a few different weights. Even if you start with Burmese text in a Unicode font, we can help you convert to Zawgyi and implement that into the design file. Our team can help you maintain parallel assets in Zawgyi for design and Unicode for everything else – that way you have the best of all worlds when working with Burmese.

Have a Burmese translation and typesetting project? We’d love to help!