You may have heard people say that “karma’s a b!+c#,” but have you ever heard anyone describe karma in the context of cultural beliefs affecting healthcare outcomes? In our last blog post, we explored the effects of making, or not making, healthcare communications in the U.S. available in languages other than English. But language is often only one component of what Swihart and Martin describe as “culturally competent medical care.” Elements such as an individual’s religion can also impact their choices when it comes to medical care and participation in clinical trials, and as such, it deserves our consideration as we specialize in international pharmaceutical marketing translation. 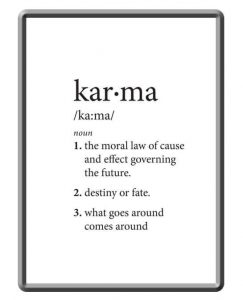 The principle of karma is a central element in various religions and philosophies, such as Hinduism and Buddhism, which, according to Pew Research Center, are two of the five most practiced religions in the world. While both Hinduism and Buddhism were born in India, practice of Hinduism has significantly eclipsed that of Buddhism in modern-day India, which is the world’s second-most populous country. Buddhism continues to be practiced throughout east and southeast Asia, including in China, the world’s most populous country. And while most members of these faith communities live in the Asia-Pacific region, there are practitioners all over the world, and North America is home to the second-largest population of both Hindus and Buddhists.

The concept of karma explains that consequences manifest in people’s lives as a result of their behavior, and according to Swihart and Martin, pain and suffering are seen within this framework as a direct result of prior actions. This can have varying effects on choices made when it comes to healthcare. It is conceivable that a believer in karma might be less inclined to seek or accept treatment, as their illness or condition is accepted as an inevitable consequence of their past behavior. Or they may simply seek treatment on different terms than someone who does not believe in karma – they may choose to wait longer to seek treatment, for instance. Then there is the belief that a person’s qualities can be transferred by way of their physical body. This might give pause to patients who have been told that they need a blood transfusion or organ donation. Hutchinson and Sharp are also careful to point out that healthcare decisions can be influenced by the fact that according to karma, a person’s future existences or the health of their descendants may be affected by what is done to their body.

When it comes to clinical trials or other medical research, Hutchinson and Sharp emphasize that karmic consequences will also need to be carefully considered. Potential participants may be deterred from participating in a study for some of the same reasons given above (transfer of personal qualities, effect on future reincarnations), but they could also justify their involvement by reasoning that any discoveries or breakthroughs made will benefit humanity. A pamphlet published by the Alberta Health Services further explains that from a karmic point of view, a person’s physical body is degradable and any way in which it can be used for the welfare of humanity is recommended.

The takeaway on cultural beliefs in healthcare

Given the large populations of adherents to belief systems that include karma, and the sizeable diaspora of these communities around the world, the considerations we’ve just explored have the potential to affect millions of individuals. And this is just one example of cultural beliefs affecting healthcare outcomes. Catholicism’s perspective on birth control is another highly visible instance, and as the sources included in this post indicate, countless articles, handbooks, brochures and other resources have been published to address a myriad of possibilities. What does all of this mean when it comes to patient-facing publications and interactions? It means that language is just the start. Swihart and Martin recommend incorporating culture-specific values into health promotion. Healthcare translations need to consider not just grammar and vocabulary, but cultural and religious beliefs that can have a significant impact on healthcare choices. If you’re wondering how this might affect your publications, get in touch – we’d love to speak with you!