The decision to translate hashtags and manage and cultivate a social media campaign around that requires planning. Think of the English campaign creation and the work that goes into the brand creation and the hashtags that reinforce that message. When that copy goes to translation, a client needs to decide what their strategy will be for that second language market and whether they will create a new hashtag in the second language or whether they will leave it in English. In the case study below, we will look at why the former phrase “safe sex” is being replaced by “healthy sexual” for HIV awareness. 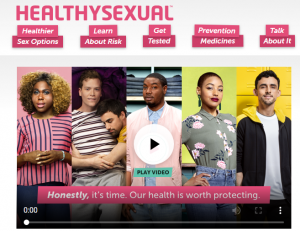 We work in healthcare communications and a recent campaign done for Gilead centers around the hashtag #healthysexual.  When they decided to do this in Spanish, we did some research to see if this hashtag was being referenced by Hispanics or if it had been coined in Spanish another way.  We wanted to find out what the local community was doing.  One of the Hispanic organizations that supports and collaborates with the pharmaceutical company, Gilead, and their work with HIV awareness, is Latinos Salud.

We found a video they have on YouTube talking about the resources for Hispanic gay men and the HealthySexual campaign, however, surprised to find it in English only. We contacted them via their Facebook page to ask them if they knew if this hashtag had been coined in Spanish at all (they are in the Florida market). They were unaware of a Spanish translation of it and only the English reference to it from the Gilead campaign.  We did do searches on Twitter, Tumblr, Facebook and Instagram for more literal translations of the hashtag suggested by our Spanish healthcare translation team such as #Sexualidadsaludable, #Sexualmentesaludable and #Sanosexual but did not find them being used or talked about on forums.  As a translation firm specializing in healthcare translations, we look at our role as consultants also to advise our clients and help them navigate decisions when dealing with other languages and cultures.  Do you get this kind of advice from your Language Service Provider as a partner in your success?  If not, you may want to choose a provider that specializes in a particular area and can advise you or delve into your marketing strategy with you.  In the end, the client kept the translation in English but we did put in a translation in parenthesis behind it for ease of comprehension.  If the client would decide to translate the hashtag, we would advise on focus group testing it as well.

We have worked with other clients that do translate their hashtags.  Here is an example of a decision to translate hashtags of one we wrote about 2 years ago.

So give us your feedback on what you do in your marketing campaigns or those that specialize in healthcare communications. What do you think?