Healthcare translations for Hispanics with HIV

In our work with healthcare translations on patient education in Spanish for Hispanics with HIV,  Latinos represent approximately 17 percent of the U.S. population, but account for an estimated 21 percent of people living with HIV and an estimated 24 percent of all persons with a newly diagnosed infection according to the CDC Report HIV among Latinos. Hispanics with HIV or Latinos living with diagnosed HIV infections have lower levels of care and viral suppression than do non-Hispanic whites but higher levels than those reported among blacks or African Americans. The annual rate of diagnosis of HIV infection among Hispanics or Latinos is three times that of non-Hispanic whites, and a recent study found increases in incidence of HIV infection among Hispanic or Latino men who have sex with men. Men who have sex with men (MSM) accounted for 84 percent of the estimated HIV diagnoses among Latino men in 2014. If these rates continue, it is estimated that 1 in 4 Latino MSM will be diagnosed with HIV in their lifetime.

The key messages in a variety of social campaigns, patient education and and prevention networks is to stay on medication as prescribed and stay undectable.  Once your viral load is undetectable, you can’t transmit the virus. We worked on  a series of videos to illustrate this point with healthcare translations to raise awareness with Hispanics with HIV in Spanish at Help Stop the Virus. 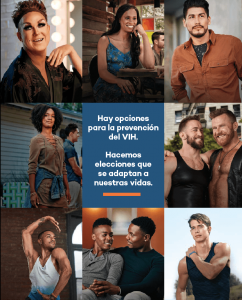 Some of the challenges when working in healthcare translations for a particular diverse population are to find the current terminology that is being used.  We do quite a bit of research on our end online and read different blogs, social media and forums to see the current terminology that is being used.  This was true for the term like Undetectable (used in HIV materials) or the acronym MSM (men who have sex with men).

The term undetectable is used in English to modify a person but this is very different for Spanish because a person cannot be undetectable, only a virus.  Our team felt that since this population is so vulnerable and stigmatized, they were not sure they would like the idea of “being undetectable” if we translated that literally because it sounds like “invisible”. Increasingly, the trend is to always try to make a distinction between people and their illness, people with disabilities instead of disabled, for instance, to avoid the defining of stigmatizing people because of their condition. This was an instance in translation in healthcare where we had to defend the translation and add in text that the “virus is undetectable.”  In healthcare translations, literal translation is never a good idea. Translation in healthcare requires an understanding and research of the subject matter, the target population and the goal of the information.

If you are working with patient education, advocacy or healthcare communications, you need a partner in healthcare translations that can support you with research and go beyond translation. Give us a call.