Linguistic Screening (or Product Name Testing) of your English Product Name should not be the process by which you’ll want to evaluate your Product Names in China. Rather, Chinese product names benefit more from a phono-semantic matching process by which the sounds and/or meaning of the name are matched to fit the English name and brand. Don’t let your efforts and budget be futile.

English Product Names in China typically are evaluated based on the following:

1. Tone of voice when pronounced

The tonal aspect languages is often mystifying to speakers in the Western world. The use of different tones in Chinese greatly affects what meaning is associated with the same characters. Chinese uses 4 different tones (flat, up, down and a down-up pitch) as well as a neutral tone. When Chinese speakers pronounce the English product name, the tone that is used by the Chinese speaker is often affected by the level of familiarity with the English language.

To most native Chinese speakers, English is a very unnatural sounding language. Many sounds produced in English are nonexistent in their native language and difficult to pronounce. In Mandarin for instance, the main language spoken in mainland China, syllables never end with consonants except /n/ or /ŋ/ (and /r/ in Beijing). This causes Chinese English learners to either omit the consonant or add an extra sound after it.The level of familiarity with English of a Chinese speaker affects what the English product name would sound like in pronunciation.

Once Chinese speakers match the English name to Chinese sounds, the name gets meaning. Just like with personal names, Chinese speakers will associate the sounds of the English name with sounds that are familiar in Chinese and create meaning. The choice of that corresponding sound can be chosen to be either negative of positive which affects meaning. As one learns when going through this product name testing process, meaning is everything in China when it comes to names.

Claiming your Brand Name in China 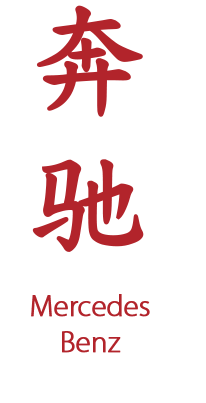 The challenge with any established English product name in China or brand in China is to ensure that this process of converting an English name to a Chinese sounding name is managed before the market does it for you. What you’ll find out with Linguistic Screening is that pretty much any English name can be turned into a positive or negative sounding name in Chinese. When clients come to us to evaluate English names in China, we often end up with lots of ambiguity towards positive and negative meaning in syllables. However, just because your name has potential negative meanings in Chinese, that doesn’t mean that it is a threat to your brand.

Even if you evaluate big names like Coca Cola, Walmart, Benz and Google, there are multiple ways to make these names sound bad in Chinese. For example, Benz can easily be pronounced as “笨死” which literally says “stupid to death.”  “Ben-si” is the Pinyin/Chinese pronunciation  in Chinese, and a lot of Chinese people still laugh at the name, though the manufacturer smartly transliterated it as s (ben-chi) meaning “Racing” in Mandarin and “平治” (meaning “peaceful reign”) in Cantonese, which made it a top brand in China.

The art of designing a Chinese name 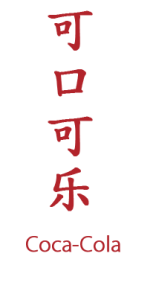 Instead of testing your English Product Names in China  and wondering whether your name sounds good or bad in English, your international market development in China should be focused on creating a great Chinese name. The art of this task is famously captured in the way Coca Cola created a Chinese name that not only sounds phonetically the same as the English pronunciation, but also has a positive meaning that perfectly relates to the product. Like Mercedes Benz was able to capture their brand promise of racing, comfort and superior quality, Coca-Cola’s product in China “可口可乐” smartly translates back as “tasty fun”. Read this article on a few examples other big brands that have resonated with the Chinese names.

Not every brand name development will be so lucky, though. Names typically either are developed to match the sounds of the original brand (phonetics); having a meaning that’s closely related to the product (semantics) or both. Not many brands opt to develop an entirely new brand that needs to be built from the ground up, although that may have benefits if your brand can be established with purely local appeal.

Instead of looking for possible positive and negative meanings of your English brand from the perspective from a Chinese speaker, invest your time in finding out the positive brand elements that could be hidden within a number of possible Chinese pronunciations. And then, claim your name by using it in your brand messaging so that the market can adapt. Taking control over your Chinese brand is the number one priority, as waiting around for the Chinese public to choose your name may set your brand off into ambiguity or worse….they make fun of the name in China like they did with Airbnb. Here are some final tips:

Give us a call for more information on linguistic screening services when doing your international market research. We’re happy to walk you through the process!