Use of the term Latinx in healthcare marketing: Considerations to make 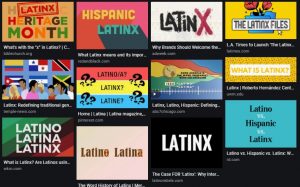 If you type “use of the term Latinx in healthcare marketing” into Google, the first non-sponsored result is tellingly entitled “Latinx – to use or not to use?” If you click on that title, you find a blog post from market intelligence agency Mintel. But if you’re looking for a cut-and-dried, yes-or-no answer to the question in the post’s title, you won’t find one. Despite the term’s growing popularity, it remains the subject of some mystery and controversy.

Various internet sources disagree on when or by whom the term was originally created. CNN writes that “it’s unclear where and when exactly the term ‘Latinx’ came about.” The Merriam-Webster English-language dictionary claims that the “first known use of Latinx” is in 2007, but Mark Hugo Lopez, the Director of Global Migration and Demography Research at Pew Research Center, argues that there is evidence that Latinx has been around since 2004. The Pew Research Center also asserts that the term’s origins are among US English speakers. This is in part why so many find it problematic as a descriptor for a group of people for whom Spanish is a primarily, or perhaps even exclusively, spoken language.

Many who advocate for the use of Latinx, even if they do not use it themselves, recognize it as an inclusive term that incorporates individuals who fall outside the male/female gender binary, or who don’t want to be identified by their gender. David Vazquez, a professor of race, gender, and culture studies at American University, told NPR that “Latinx was asserted mostly by people who are gender nonconforming” but today “most people who use the term are open about gender non-conformity, they look for opportunities to be politically progressive and they look for opportunities to be inclusive.” Graciela Mochkofsky, an Argentinian-American who launched the first bilingual master’s program at the Craig Newmark Graduate School of Journalism at the City University of New York, agrees that she “like[s] the values and the ambition behind the term.” 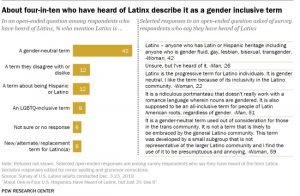 Using Latinx to be inclusive of non-binary or gender queer individuals is admirable, but when respondents of a 2019 Pew Research Center survey were “asked in an open-ended question what Latinx means in their own words,” only 9% said that it is an LGBTQ term. A much larger percentage, 42%, described it as a gender-neutral term. And while gender neutrality can also be a form of inclusivity, being “gender neutral” has broader implications in Spanish than it does in English. As we wrote in our blog post about common pitfalls in Spanish marketing translations, the ending -os is grammatically correct for a mixed gender group, even though it is the same ending used for a group of all males. Arguments are increasingly made that this grammar rule is potentially exclusionary and that the time has come to fix it.

Could the use of the term Latinx be the way to fix it? Many who have examined the issue from a perspective outside the US and outside the English language say no. In a 2015 op-ed for Swarthmore College’s campus newspaper, Gilbert Guerra and Gilbert Orbea wrote that “by replacing o’s and a’s with x’s, the word ‘Latinx’ is rendered laughably incomprehensible to any Spanish speaker without some fluency in English.” Hector Luis Alamo, former deputy director of news site Latino Rebels, described Latinx as “the bulldozing of Spanish.” Evan Odegard Pereira, in an essay for the New York Times, echoes this sentiment, writing that “to native Spanish speakers, Latinx feels foreign and imposed.” Odegard Pereira also reminds readers that “activists in Argentina have offered Latine as a non-Anglicized gender-neutral option which actually works in Spanish.” 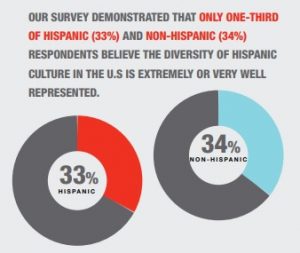 Source: The Hispanic Influence on American Culture (a white paper by Conill)

Various polls and surveys do show, though, that Hispanic is generally preferred by those who the term is meant to describe. The Pew Research Center survey mentioned above supports this, as does a 2021 Gallup poll in which 23% of respondents said they prefer the term Hispanic, while 15% prefer Latino (and only 4% prefer Latinx). Among the 57% of respondents who said they had no preference either way, 57% expressed a preference for the term Hispanic when pressed about a case in which they had to choose (versus 37% who prefer Latino, and 5% who prefer Latinx).

We’ve felt the tension from this question in some of our own projects, and it would seem that we are not alone in the language services industry. In their news briefs roundup for August 31, 2021, the American Translators Association wrote about use of the term Latinx and highlighted the same Pew Research Center survey referenced in this post. Lopez asserts that the findings of that survey “reflect the diversity of the nation’s Hispanic population, and the Hispanic population of the US thinks of itself in many different ways. ‘Latinx’ is just one of those many dimensions.”

This is why we recommend, as with any campaign, that you do sufficient market research when considering the use of the term Latinx in healthcare marketing. If you do focus groups for your English-language campaigns, why not do them for your Spanish-language ones? Have you created English-speaking personas? If you’re intending to translate into Spanish, we’d recommend creating Spanish-speaking personas, too. If you’re looking for translation services that go deeper, get in touch to see if we could be a good fit for you!