Four major questions that often come into play when doing marketing translations in Spanish are 1) Which variant of Spanish? 2) Is the audience one person or more than one person? 3) Should formal or informal address be used? 4) Which gender markers are appropriate, or is gender neutrality preferred? 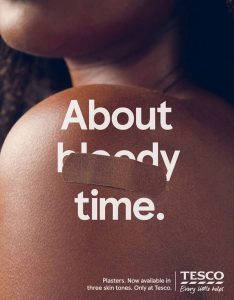 We’ve written an entire blog post about variants of Spanish, so we’ll keep the answer to question #1 brief here. While Spanish spoken around the world is mutually intelligible, there are some grammar and vocabulary differences from country to country. If you want your translations to be as effective as possible, you’ll want to translate into the variant that your intended audience speaks. The same concept exists in English – while the ad at right is comprehensible to an American, the use of “bloody” and “plasters” make it obvious that this ad wasn’t written for the US market. You certainly wouldn’t want to alienate your target audience by using language that will not resonate with them.

The other three questions go a bit deeper for marketing translations in Spanish than they do in English. While in English we use the word “you” to speak to one person or to a group of people, Spanish has a singular “you” and a plural “you.” Not only are the pronouns different, but the verb form is different, too. So, an advertisement in English that asks, “Do you wish your internet was faster?” could be addressed to an individual, a couple, a family, or a group of roommates. The best way to translate this question into Spanish will depend on the intended audience. (Variant of Spanish actually comes into play here too! For the sake of not turning this blog post into a 2,500-word Spanish grammar lesson, we’ll leave it at that.) Is the ad meant to reach an individual or a group? When in doubt, English can rely on the ambiguity of “you” (and the verb forms that go with it), whereas Spanish-language marketing materials must be more intentional around this kind of language. When you’re copywriting for a campaign that you know will be translated for a Spanish-speaking market, make sure to keep this in mind.

This can be especially relevant when translating materials for healthcare educators. We’ve translated a wide variety of patient education resources into Spanish, including PowerPoint presentations, brochures, leaflets, and interactive online tools. And while a PowerPoint presentation is more likely to be addressed to a group than a print piece, never say never! When we translated a booklet for a fertility specialist into Spanish last year, the client wanted us to use the plural “you” to acknowledge that couples often navigate fertility treatments together.

Formal versus informal address is also a bit more, shall we say, formalized in Spanish than it is in English. Linguistic choices such as using slang can be seen as taking an informal tone in English. In many cases, however, formality or informality in the English language is most obvious in more personal interactions. One example would be addressing someone by a title and their last name, rather than their first name. But in the same way that Spanish has a plural and a singular “you,” it also has a formal and an informal “you.” Deciding which to use depends on several factors.

For example, we recently translated a series of posters inviting employees to complete a satisfaction survey. Our Spanish translation team chose to use the formal address because the posters would be displayed in a professional setting. When we do our regular marketing translations in Spanish for Famous Footwear, however, we always use the informal address. The argument here is that this creates the feeling of information shared between friends. 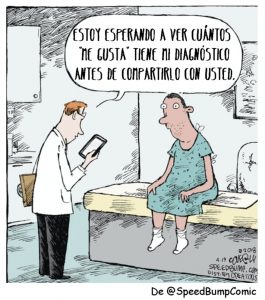 We also recently worked on a Spanish translation for a business card and brochure informing clinic patients that their doctor would be relocating to a new practice. The lead translator on the project shared with us that traditionally, doctors would always use the formal address with their patients and that her parents would expect this to be the case. Her own doctor, on the other hand, uses the informal with her, as they are close in age and she feels that it fosters a more personal connection. Using formal language can be a question of respect, but it can also put distance between speaker and listener. For this reason, it can be especially challenging to choose whether to use the formal or informal address in Spanish healthcare marketing translations. When in doubt, we often default to formal address to avoid risking offense. But it’s always worth a conversation with your translation team! 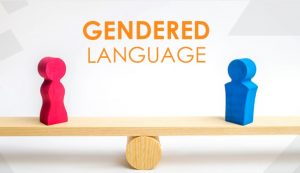 Finally, the question of gender markers and gender neutrality is certainly alive and well (and important) in English, but it doesn’t have all the same implications as in Spanish. This is because in Spanish, most adjectives have a different ending depending on the gender of the person, place, or thing that they are describing (because in Spanish, even words like “tree,” “soap,” and “glass” have a gender; once again, we won’t go any further in depth on that here). Like “you,” which has ambiguity on its side in English, descriptors like “good,” “special,” and “appreciated” can be used in marketing materials without bringing gender into play. What begins as a gender-neutral asset in English may still be met with a challenge in translation. If any person or people are described in the copy, will the translations use a masculine or feminine form of the adjective? Grammatically speaking, the plural “-os” ending is correct for either a group of all men or a mixed gender group. However, more progressive voices in the Spanish-speaking world argue that using a masculine gender marker simply isn’t acceptable for a mixed gender group. For marketing translations in Spanish, you’ll have to decide how you’d like to work within, or around, this idea.

If you’ve never explored marketing translations in Spanish, there’s more to them than meets the eye. You’ll need to consider your target market in ways you might not have considered to produce the most correct and effective Spanish assets – whether those are translations for healthcare, retail advertisements, or HR communications. If you’d like help navigating or just want to know more about doing marketing translations in Spanish, please get in touch – we’d love to hear from you!