Language requirements for conferences in Quebec 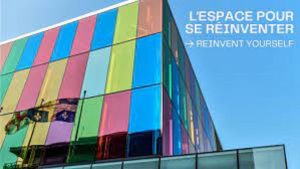 A recent project that crossed our desk has presented us with an interesting issue: language requirements for conferences in Quebec. We do a good amount of translation into Canadian French and have written about our experiences and the various regulations around the use of French and English in Quebec from a few different angles (food packaging, advertising, priorities, and differences from European French to name a few). We don’t often highlight the exceptions to these regulations, but the same starting point applies: consider your audience as well as what is required by law.

The AIDS 2022 Conference is being held in Montreal, the largest city in Quebec, from July 29th to August 2nd. The conference website describes it as the “world’s largest gathering on HIV and AIDS” and assures potential attendees that it is “committed to supporting everyone from all countries with the travel process to attend AIDS 2022 in Montreal.” The featured speakers will also be coming from all over the world. The conference website and program, however, are all in English. This is not unusual in international science circles, and English is also one of Canada’s official languages. The other is French, which is also the official language of the province of Quebec. 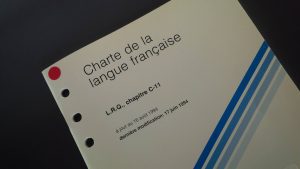 Given Quebec’s strict regulations regarding the use of French in the public sphere, it’s no surprise that we received a request to translate several conference-related materials from English into Canadian French. Article 58 of the Charter of the French Language dictates that public signs and posters and commercial advertising must be in French. It also allows that they can be in French and another language, as long as French is “markedly predominant” (a qualifier that is defined elsewhere in the Charter). There is also a caveat, however, that “the Government may determine, by regulation, the places, cases, conditions or circumstances… where French need not be predominant or where such signs, posters and advertising may be in another language only.”

This exception requires conference organizers and sponsors to answer a few questions. The first is: is the AIDS 2022 conference “intended solely for a specialized or limited public”? The answer to this is certainly yes. The Conference themes and objectives page describes, among other goals, “[supporting] the next generation of HIV scientists, clinicians and other service providers and advocates.” Conference attendees, then, will be individuals with a background in HIV/AIDS awareness, prevention, and treatment. The fact that the conference is a ticketed event in and of itself also means that not just anyone can or will attend.

This determination, however, may be complicated by the next question: where will the posters and ads appear? Articles 15 and 16 of regulation C-11, r.9 require that commercial advertising displayed on billboards, on or in any public means of transportation and on or in the accesses thereto (including bus shelters) must be exclusively in French. Our client is advertising on billboards as well as in bus shelters and the subway (or the “métro,” as it is called in Montreal). So now we have a conundrum. We’ve determined that the Conference is intended for a specialized or limited public. If the posters are displayed during the event, the Charter seemingly allows for the posters to be exclusively in a language other than French. However, if they are on a billboard or in public transit, they must be exclusively in French. As you can see, language requirements for conferences in Quebec are not always straightforward!

To address this conundrum, let’s circle back to our starting point: what is required by law, and what is the intention behind your material? We’ve seen that language requirements for conferences in Quebec can be confusing. When in doubt, we recommend consulting with an expert. We’ve worked on a lot of Francization and are always happy to share what we’ve learned with our clients. Many firms also choose to work with an expert in Quebecois language regulations, whether that is an in-house member of their legal team or a legal consultant. Regarding intention, let’s look at the AIDS 2022 Conference example. If the intention is to encourage Quebecers to attend or learn more about the conference, then publishing posters and other ads in the province’s official language makes sense. If a brochure with information about the conference venue, speakers, and program will be circulated exclusively to conference attendees, it makes sense to publish the brochure in the “official language” of the Conference (English, in this case). Our client decided to publish all their public advertising exclusively in French and all their internal Conference materials in both English and French. This ensures that they will be compliant with any language requirements for conferences in Quebec, and honors and recognizes the Conference host city and any local attendees. This last point can be impactful in immeasurable ways – that’s another post for another time!

Do you have questions about hosting a convention, conference, or exhibition or doing business in Quebec? Drop us a line to see if we can help!